my review of the John Banville 'Henry James' novel from the newspaper, not a whole heartedly ringing endorsement I am sorry to say. And I don't quite know how I managed to bring Kill Bill into all of this...
... 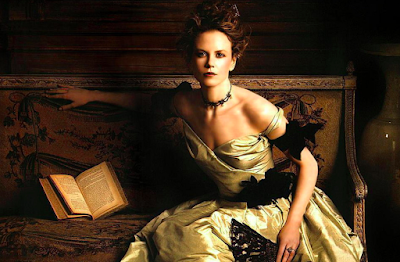 When a writer turns to pastiche in the later stages of his career he is either paying a compliment to the muse that inspired him throughout the difficult times or else the poor soul has run completely out of ideas. What to make then of John Banville’s Mrs Osmond which is the second pastiche he has published in the last two and a half years? Banville’s previous effort, The Black-Eyed Blonde, was a journeyman-like sequel to the Raymond Chandler novel The Long Good-bye that although lacking Chandler’s gift for simile, did sometimes echo Chandler’s skill for characterization and occasional seat-of-your-pants plotting.
Mrs Osmond is a sequel to Henry James’s A Portrait of a Lady, a novel Banville has proclaimed in interviews to be the greatest example of the form in the English language.
Hmmmm.
Portrait famously ends with the beautiful and brilliant Isabel Osmond (née Archer) realising that the spiteful Gilbert Osmond has married her for her money and that his long term mistress is Madame Merle. Isabel quits Rome after visiting Pansy, Osmond’s daughter, to comfort the dying Ralph Touchett in England, where she remains until his death. An unpleasant encounter with Caspar Goodwood forces her to flee again back to Rome. The reader is left in a delicious state of unknowing, pondering whether Isabel is returning to Osmond to live heroically for Pansy's sake or whether she is going to somehow rescue Pansy and leave Osmond.
John Banville steps into the breach to tell us what he thinks happens next. We don’t, of course, immediately get the satisfying confrontation with Isabel’s dirtbag scrub of a husband Gilbert Osmond. Make ‘em laugh, make ‘em cry, make ‘em wait, Wilkie Collins observed and Banville first gives us something of a Bradshaw’s railway tour of fin de siècle Europe through France and Switzerland where Isabel meets various characters we encountered in the original. We meet again the charming Hildy Johnson prototype, Henrietta Stackpole, with her crazy ideas about freedom for women. The villainous Madame Merle shows up and the two Osmond women circle one another like sabre wielding duellists looking for an opening. We rendezvous with the terribly nice Edward Rosier, who pursued Pansy’s hand in marriage but who was turned down by her snobbish father. Isabel seeks out her sister-in-law, Countess Gemini who, in Portrait, revealed all about her brother, and we get another run in with the delightfully batty Mrs Touchett, Isabel’s aunt, who saved her from a life of genteel dullness in Massachusetts.
Banville does a nice job building upon and enhancing these characters although the conversations don’t do a whole lot to forward the story. Banville has garnered much praise for imitating the prose, syntax  and page length paragraphs of Henry James. His homaging skills are indeed impressive and I doubt whether even a James scholar could tell the difference between a Banville description of a French railway carriage and the actual article.
The dialogue is a little harder to swallow, for Banville often attempts a facsimile of Henry James’s ill judged attempts at wit. James’s genius clearly did not run to banter, although his admirers urge us to overlook this defect by explaining that humour does not age well. This defence is unconvincing as Portrait shares a decade with Oscar Wilde’s first plays, peak Mark Twain and Jerome K Jerome – all of whom remain laugh out loud funny. A Portrait of a Lady becomes a great novel once the gears have begun to turn and James stops malleting us with the stale jokes and ghastly repartee of its initial chapters. When Banville tries to replicate James’s jocularity the results are almost unbearably tedious.
The wheels of Banville’s novel inevitably turn towards a revenge plot that many readers will find satisfactory. I was unconvinced by much of it and found the set to with Gilbert as anti climactic as the Bride’s meeting with Bill at the end of Kill Bill – a touchstone I’m not sure Banville or James would wholly approve of. However, this brings me to the larger point: the ending of A Portrait of a Lady was perfect as it was and when I finished Mrs Osmond I was left wondering why Banville had done all of this.
The popular parody Twitter account @John_Banville imagines Banville, Colm Toibin and Roddy Doyle spitting at one another in a state of perpetual feud. After Colm Toibin published his best selling biographical Henry James novel, The Master, the @John_Banville account erupted in a jealous rage, claiming he could do better and sell more. The actual John Banville, I’m sure, had more lofty goals in mind but artistically Mrs Osmond doesn’t come close to The Master’s concentrated brilliance, psychological penetration or deep emotional resonance.
Mrs Osmond however is not a total waste of everyone’s time. Banville is a professional and nothing in this book will unduly disturb a Henry James completest. Fans of the novel and the Nicole Kidman film might well enjoy this as a harmless entertainment. Mrs Osmond is competent, safe and reliably dull. I am with Gunter Grass here, it may be an arid book, but it is a book nonetheless and therefore sacred.
The real psychic toll of Mrs Osmond will not be on the reader but will be on the author. As a Booker Prize Winner and perpetual longlistee for the Nobel Prize (another subject the @John_Banville parody account hilariously mocks) John Banville can petty much publish anything he wants now. We can only hope that something exciting happens to him in real life or else, no doubt, a disheveled, rosy-cheeked Molly Bloom shall arise from her linen sheets and be coming soon to a bookshop near you in a quality hardback edition.
Posted by adrian.mckinty at 10:13 AM