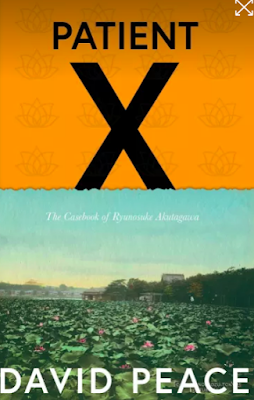 David Peace's new novel Patient X, his 10th, is a series of interlinked vignettes inspired by the life of Ryunosuke Akutagawa, the Japanese master of the short story who is best known in the West for Rashomon.


Akutagawa was born into a middle-class family in Tokyo in 1892, the youngest of three children. Great things were expected from the boy who was named Ryunosuke (Son of the Dragon) because he was born in the Year of the Dragon, in the Month of the Dragon, on the Day of the Dragon, and at the Hour of the Dragon. Heady stuff. Maybe too heady. Early in 1893 his mother began to lose her sanity and was confined in the family home until her death shortly after Akutagawa's 10th birthday.

Akutagawa was raised by two aunts who were mavens of the arts. He had tutors in English, Chinese and Japanese literature. He was a precocious writer of haiku and in his early 20s his stories attracted the praise of the most famous Japanese novelist of the day, Natsume Soseki. From then on a successful career in literature beckoned.

Sons of the Dragon, however, never have it so easy and while the newspapers and magazines clamoured for each new Akutagawa tale, his life began to fracture and he worried that he too was going mad. Sleep became difficult and characters from his stories began invading his daytime reveries.


The dividing line between the real and the unreal, between truth and fiction began to blur and this, of course, became grist for further fictions. At the age of 35, Akutagawa died from an overdose of his insomnia medicine.

You can see why a singular talent such as Peace would be attracted to this material. Peace, originally from Yorkshire, is a long-time resident of Japan and author of three crime novels set in post-war Tokyo. He is also the author of two biographical novels about the brilliant, eccentric English football managers Brian Clough and Bill Shankly, and this, his third biographical novel, shares unlikely thematic resonances with those two very English books.

Shankly, Clough and Akutagawa are single-minded in their pursuit of glory, they are all burdened with a vision that those around them cannot always see, they are all accused of arrogance and at the end, madness and melancholy begin to creep into all their stories.

Akutagawa is Patient X, a man intoxicated with words. Peace demonstrates this by blurring fiction and biography to give us stories of love, loss, religious allegory, fairytales, biographical vignettes and fables that map the territory between insanity, truth and lies.

My favourite story in the novel is recounted by Akutagawa's friend Soseki, who tells him the strange saga of his visit to England (Japan's lost twin island on the other side of the world) where, as a lonely student, he is befriended by a crazy artist (possibly Walter Sickert), who is almost certainly Jack The Ripper.

Peace's prose is always changing and this time there is a freer, more lyrical approach to the work and less use of his trademark leitmotif and repetition. But Patient X is still an ambitious, sometimes difficult book that rides the line between Peace's personal mythology and Akutagawa's often occult visions.

It is further proof, if proof were needed, that David Peace is one of Britain's (and the world's) most gifted and original novelists.