a LitHub piece from last November...
...
At the beginning of November I found myself in Prague with enough loyalty points at the Accor Chain to get myself a room in a fancy hotel way out of my usual league. There was one particular room in one particular hotel that I had been eyeing for years and much to my amazement I found that it was available. 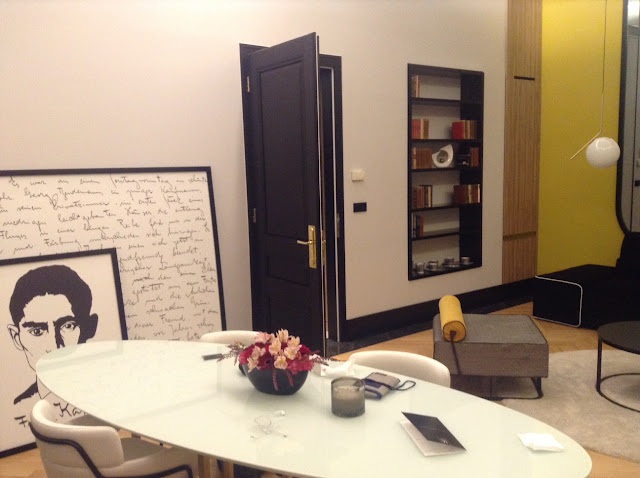 The hotel was the Sofitel Century Old Town and the room was the Franz Kafka Suite. The Century Old Town occupied the former Austro-Hungarian Workmen's Accident Insurance Institute and a second floor office of this building was the place where Kafka had toiled as a lawyer from 1908 - 1922. This office and the room behind it had been converted into the Kafka Suite.
Kafka’s childhood home was long gone but for Kafka fans like me it was incredibly thrilling that for enough cash or Accor Reward Points you could spend the night in his old office.
I checked into the Century Old Town at two o’clock on a brisk November Tuesday in Prague to find that the room was not quite ready. Housekeeping was doing a quick final vacuuming I was told and I was given a voucher for a free beer at the bar which suited me just fine.
When the room was all set I walked up the wide, restored nineteenth century stair-case and found myself outside the Franz Kafka Suite where a little plaque confirmed me that this was indeed Kafka’s actual place of work. I put the key card in and opened the door.
The first thing that confronted me inside the room itself was pitch blackness. The outer door closed behind me and rather like – I fancied –Gregor Samsa I too was trapped in a bourgeoisie hell of the indoors.
“Aha!” I thought, you need to find the little slot to put your card in to get the lights to come on. I fumbled around and I did find the slot, but when I inserted my card the blackness remained.
I began to feel a little buzz of excitement. The Kafka Suite was deliciously Kafkaesque already. What fresh thrills and terrors lay ahead? The exhilaration began to dissipate when I turned my phone light on and realized that I wasn’t in a fiendishly difficult psychological maze partly of my own making, no, I was in an ordinary hallway and there was a problem with the electricity.
After a bit more fumbling I discovered the fuse box and although everything was in Czech it was pretty obvious which circuit had been blown by the vacuum cleaner. I flipped the switch and hey presto the lights came back on. 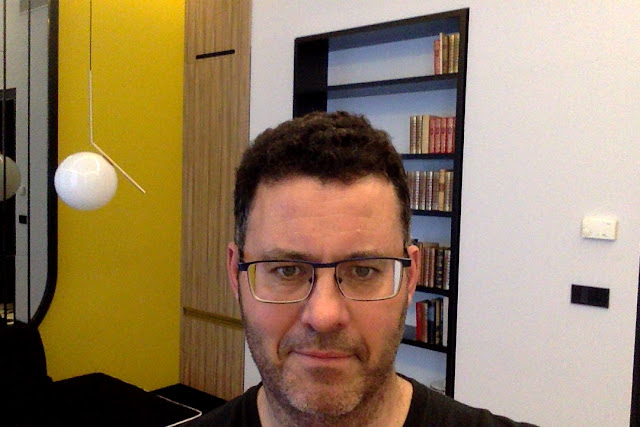 Out of the hallway I discovered that the Kafka Suite was gorgeous. The back room contained a generously proportioned bed, a huge bath, a luxurious shower and dual washbasins. But the front of the suite was definitely where the action was. The front room was an enormous light filled chamber with a sofa, a dining table and a writing desk that looked out onto the street.
This had been Kafka’s actual writing office. He had mostly prepared legal briefs here (the book to read on this is Franz Kafka: The Office Writings edited by Stanley Corngold) but you could imagine him working on short stories and letters in his lunch break or doodling away at ideas in the margins of his jotter.
The room was minimalist and contemporary, painted a bright umber with a portrait of Kafka himself lying against the wall in one corner. There was a bookcase containing mostly French hardbacks by second tier novelists of the first half of the twentieth century, but there were also a few modern paperbacks as well presumably left there by previous guests. I had no qualms at all about leaving a copy of my novel Rain Dogs on a high shelf where hopefully it will remain unnoticed for years.
I unpacked, showered and then made a beeline for the writing desk. I had been to Prague as a student backpacker years ago so I wasn’t that interested in sight-seeing, rather, I had come here to work.
The theory of literary osmosis is dubious at best but for a writer it is hard to resist the lure of attempting to compose something in the place where great literary icons did their thing.
I have tried this game before and it hasn’t exactly worked out. In the old British Museum Reading Room I found what was allegedly Karl Marx’s seat while I was studying philosophy at University College London. The Marxian seat didn’t help me at all with my essays which were uninspired and generally terrible. A couple of years later at Oxford I frequented the Eagle and Child pub where JRR Tolkien and CS Lewis used to read and write. The epic fantasy novel I began there mercifully disappeared into a crashed hard drive never to be retrieved.
A few years after that in Paris I toiled as a plongeur during the day while spending my evenings at the Deux Magots café. I was trying to emulate Sartre, Camus and De Beauvoir’s philosophizing while drinking enormous bowls of coffee and attempting to smoke Gitanes; but all I got from that experience was a massive jittery headache and a hacking cough.
My most notorious attempt at literary osmosis was in the piano bar of the Ambos Mundos hotel in Havana in 2008. For most of that year I’d had writer’s block and with a deadline looming I took the drastic step of flying to Havana via Mexico City so I could work in the place where Hemingway supposedly wrote For Whom The Bell Tolls. Maybe I too could write my magnum opus here I thought and initially things went quite well. I got a notepad and paper and the ideas flowed. Half a dozen mojitos later I was writing gibberish and after a couple more cuba libres and mojitos I was attempting to push the deft piano player off his stool so that I could give the well heeled clientele my version of All The Little Puffer Trains Down By The Station.
I wasn’t going to let that happen again. This time I was going to write at Kafka’s desk (sort of) in Kafka’s office over looking the bustling Na Porici Street.
The Kafka Suite had generously provided its visitors with paper, pens and a rather nice mechanical pencil.
I took out the pencil and a sheet of paper and stared at the blank page for a long, long time.
Then I did a little Kafka portrait in the corner of the page, then another little doodle of a cockroach. I did a pretty good drawing of myself scoring the winning goal in the World Cup Final. Then I went to the book shelf and tried to read Georges Bernanos’s Journal d'un curé de campagne for a bit but found it pretty hard to get into.
Back to the dreaded blank page. I wrote a couple of opening lines and crossed them out and got a fresh sheet of paper and stared at that for a while. 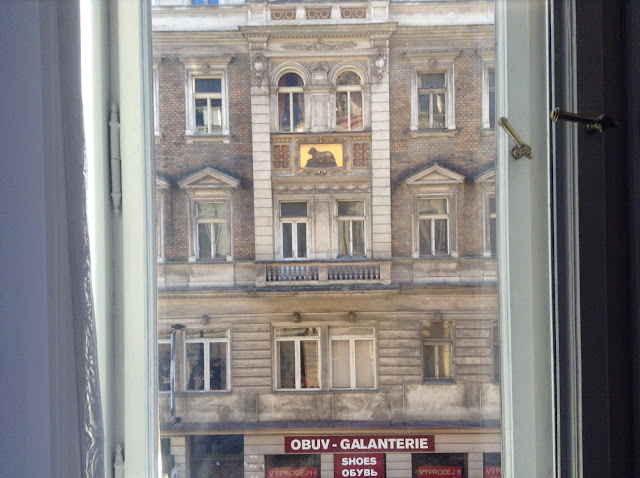 I looked through the window at the building opposite. This must have been Franz’s view when he was writing those bloody insurance reports. It was an attractive building and on the third floor there was a large, peculiar sheep bas relief highlighted in gold paint. If it was there back then Kafka must have stared at that sheep for hundreds of hours. He did in fact write one short story about a sheep: ‘A Crossbreed’ which is a story about an animal that is half-cat, half-sheep with odd eating habits and dietary restrictions. It’s not his best work if I’m honest.
The sheep did not inspire me. I wrote a spoof Raymond Chandler short story once set in Ireland called The Big Sheep. It wasn't a great story and The Big Sheep Part 2 didn’t seem like a very good idea.
Unlike a lot of fancy hotel rooms in the Kafka Suite it is possible to open the window and let the city smells and street noise come pouring in. I pulled a chair close to the window ledge and watched the trams, cars and tourists go by for a while. There were more tourists and cars than the Prague of a hundred years ago but I imagine the citizenry riding the #26 tram was much the same.
It began to get dark. I noticed a beer cellar across the street called La Republica. I found my laptop and Googled it and discovered that it served liter steins of Czech beer and pre war staples of Czech cuisine such as pork ribs, schnitzel and pretzels.
“Maybe I’ll just go over and have one stein and a pretzel and then I’ll come back and do some serious work,” I thought.
Unfortunately that decision put an end to the possibility of the McKinty Magnum Opus getting started in Kafka’s office, for La Republica was a very amenable beer cellar indeed. It was full of Irish people, one of whom, as is the way of such things, knew my sister.
I had a very good night with a bunch of new friends. The bar wasn’t that far away from the salon where Kafka, Max Brod and Albert Einstein used to hang out, booze and chat, so I think they would have approved. When I got back to the Kafka Suite I was in no fit state to write anything at all.
But eventually the room did stop spinning which was nice and I settled down in the enormous, ridiculously comfortable bed.