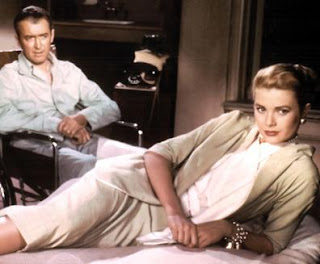 Fox Movies here has been showing a Hitchcock retrospective all month and what's so great about Hitch is that none of his films ever seem like homework. I'm a fan of the early period Hitch esp The 39 Steps (maybe my favourite Hitchcock of all) The Lady Vanishes and Rebecca but the era 1951 - 1961 is simply stunning, producing amazing film after amazing film. I can't think of a director who came up with such a strong second act to his or her career. Anyway, here's the complete list, have a read and tell me that I'm wrong:
Strangers on a Train (1951)
Farley Granger in a must-see classic story from Patricia Highsmith (screenplay by Raymond Chandler) of two strangers who take on each other's murders. You'll never ride the carousel again without thinking of this film. 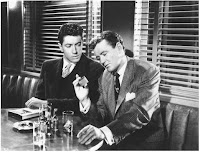 I Confess (1953)
Montgomery Clift and Anne Baxter in a thoughtful and influential character study of a priest who hears a murderer's confession.

Dial M for Murder (1954)
Ray Milland wants to kill Grace Kelly. Is he nuts? You gotta love the police inspector and the dimwitted boyfriend and the- wait a minute there's the doorbell, now where's me key?

Rear Window (1954)
The other contender for my favourite Hitchcock. James Stewart is a photographer who doesn't want to marry Grace Kelly (again, is he nuts?). He's laid up at home with a broken leg (and a sassy masseuse) and, bored out of his mind, he begins spying on his neighbours; of course he finds himself caught up in one of their murders - or maybe not.

To Catch a Thief (1955)
Cary Grant resists the charms of Grace Kelly (what is the matter with everyone?) on the Cote d'Azur while a mysterious stranger carries out a rash of burglaries. Think of the finest dessert you've ever had - this is just like that.

A pretty, short haired Shirley McClaine finds a corpse in the woods and black comedy ensues. This one's more of a B+.

The Wrong Man (1956)
Henry Fonda and Vera Miles star in a cheapo noir about a wrongly-accused jazz musician. Another B+. Fonda does a terrific job though.

The Man Who Knew Too Much (1956)
Hitchcock's remake of his own 1934 movie involves an American (Jimmy Stewart) sucked into an assassination plot via Morocco, London and Doris Day's pipes. Nice work by everyone including the orchestra.

Vertigo by Alfred Hitchcock (1958)
Yes that is the actual title. Considered by some to be Hitchcock's masterpiece. Jimmy Stewart is snared in a tragic spiral of lies, deception and obsession as Kim Novak tries to commit suicide by half assedly jumping into San Francisco Bay when there's a perfectly good bridge to leap off just to her left.

My second favourite. A frothy mousse of a movie that I first saw on the big screen in Bryant Park. The crowd cheered Cary Grant all the way through and who wouldn't? Eva Marie Saint (last seen in Superman Returns playing Jorel's mum) is the charming female lead in this cross country crossed identity caper.
Psycho (1961)
Booed at the time and now recognised as one of the most influential films ever made. Hitch makes you root like mad for nutter Tony Perkins when poor Marion's car doesn't sink in the quicksand. How does Hitch do that? He's a genius that's how.
Posted by adrian mckinty at 10:52 PM