This Is The Second Sexiest Irish Crime Writer? 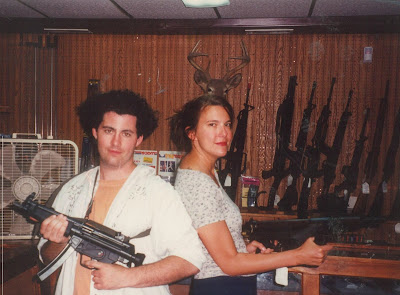 According to a rigorously scientific poll on Declan Burke's Crime Always Pays last week, I, apparently, am the second sexiest Irish crime writer after the fragrant John Connolly. From this August 2003 picture you can see why I got so many votes: the stylish Krusty the Clown hair, the glazed Deliverance-like sociopath expression, the pirate shirt. . .What's even more comforting about Mr. Burke's poll is that it means that I am the sexiest Northern Irish Crime Writer, a thing conference organisers should bear in mind when they're looking for their next guest speaker at the Tahitian Crime Fest. What's also great about the award is the fact that Colin Bateman for one must be furious, I mean would he trade the awards, bestsellers, film and TV success for the title of Sexiest Northern Irish Crime Writer? Of course he would! Next year the competition is going to be even tougher with trendily bearded Stuart Neville and boyish kung fu master Gerard Brennan entering the lists.
...
The lady with me in the pic? Professor Leah Garrett, mother of my children, god help them.
Posted by adrian mckinty at 10:01 AM