Jacques Barzun Is Alive and Well and Living in Texas 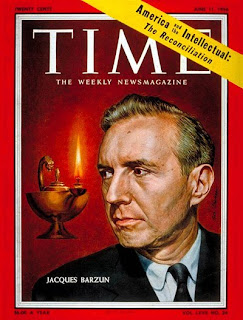 In a couple of weeks its going to be Jacques Barzun's 102nd birthday. I hope Jacques hangs in there because in this degraded epoch of ours where ill educated oafs like Glenn Beck and Patrick J Buchanan are lauded as sages Barzun is a rare link to an age when a person would be ashamed to pontificate on any subject without having a thorough knowledge of history, the classics and several European languages.
...
Born in France, educated in America, Barzun was for many decades the doyen of the Great Books programme at Columbia University. I have read three books by Monsieur B: Simple & Direct - a sensible and practical guide to writing; The Use and Abuse of Art - an essay which does exactly what it says on the tin describing the uses and abuses of art; From Dawn to Decadence - probably the best history of western civilization from 1500 - 2000 that has ever been written. Let me talk a little more about Dawn to Dec. It's basically a long but fast paced cultural history for the general reader. Barzun's prose is effortless, his learning eclectic, his wit playful, clever and acerbic. It's a book that manages to be both deep and wide ranging and most important of all it, is never dull. If you haven't read From Dawn to Decadence I both pity and envy you. I pity because you're undoubtedly lost in a sea of unknowning, but I envy because you've got a real treat to look forward to. (Hmm, doesn't Mr. T. famously say the previous sentence in a more concise way?)
...
Anyway, Joyeux Anniversaire, Jacques.
Posted by adrian mckinty at 8:28 AM