The Neville Has All The Best Tunes 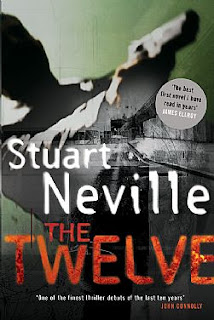 Ok, so I stole the pun in the title from Declan Burke, but if you can't lift from The Master who can you lift from? I just finished Stuart Neville's The Twelve yesterday and I was blown away by it. It's a dark, exciting, lyrical, uncompromising thriller set in Northern Ireland. James Ellroy has described Neville as a brilliant new voice in Irish fiction and after reading The Twelve I whole heartedly agree. There's a great non spoiler review on Ger Brennan's Crime Scene Northern Ireland here. And if you haven't yet jumped on board the runaway train that is the Celtic New Wave in Irish crime writing, Neville's The Twelve is an excellent place to start. And then after Neville make sure you check out: Declan Burke, Brian McGilloway, Ken Bruen, Eoin MacNamee, Declan Hughes, Colin Bateman, Garbhan Downey, Ger Brennan, David Park, Sam Millar et al. I mean really folks, wouldn't it be nice to be ahead of the trend for once?
Posted by adrian mckinty at 8:37 AM