The Beer and the Book 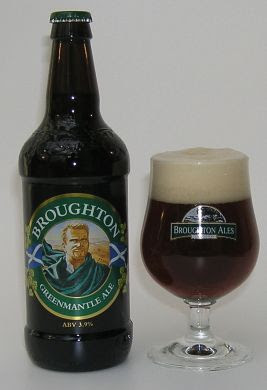 I've been reading Greenmantle by John Buchan. It's a hundred year old spy novel set in Germany and the Mid East during World War I and it is a sort of sequel to the 39 Steps. If, like me, you read the 39 Steps and didn't think it was as good as the Hitchcock film Greenmantle will come as a pleasant surprise: it's exciting, fast paced and apart from some unironic jingoism (and an over reliance on coincidence) a very good read. There's an interesting scene early on where Hannay meets the Kaiser at a railway station and the sympathetic treatment of the German Emperor must have shocked many Brits at the time (it was published in 1916).
...
But I didn't really want to talk about the book that much, I actually wanted to chat about a unique experience in my life: reading the book while drinking the beer that's been named after it. I know of no other beer which has been named after a book, and didn't know about Greenmantle Ale until I found it in my local beer shop in St Kilda. Greenmantle Ale is a light session ale - malty, hoppy, smooth and very drinkable. To my mind there were caramel and chocolate notes and a pleasant slightly tannic aftertaste. The alcohol content is not high and you could knock back three or four and still concentrate on your novel.
...
There are of course Thomas Hardy ales but I haven't heard of another beer/book combination like this. There's plenty of scope for others: War and Peace could inspire a Russian Imperial Stout and surely the Brooklyn Brewing Company could do something with Last Exit to Brooklyn. The lack of a Ulysses Porter seems like an enormous gap in the market, but of course sometimes its the evil of the giant brewing companies that's to blame.
Posted by adrian mckinty at 9:02 AM