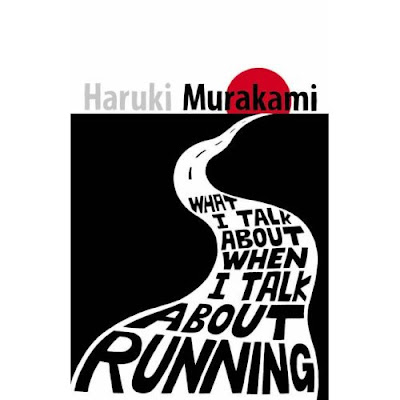 What I think about is: when is this run going to be over, or, did that pregnant lady pushing the twin stroller really just go past me, or, how many times can I listen to John Fogerty singing "I wanna know, have you ever seen the rain?" without going completely insane. What Haruki Murakami thinks about is very different. He thinks about what running means as an endeavour, he thinks about the mechanics of movement, he thinks about how good looking the girls are in Cambridge, Mass. His book is called What I Talk About When I Talk About Running, but actually he hasn't talked about it much before this, which is odd because when you read WITAWITAR you see how important running is to him. Murakami is a Japanese novelist who routinely gets mentioned as a potential nobelist, but dont let that put you off. WITAWITAR is an arresting memoir about how Murakami's interest in jogging became an obsession with running marathons and ultra marathons. He says that he took as a model (as well as his title) Raymond Carver's What We Talk About When We Talk About Love, but the book to me is actually squarely in the Japanese tradition of poetic memoir and travelogue which goes back at least to Matsuo Basho whose Narrow Road to the Deep North is the all time classic of this trope. Both men are travellers, seekers of the way, searchers after truth.
...
One of the best scenes in Murakami's book is a 60K ultamarathon in northern Japan where he bonks and entirely goes to pieces before getting passed by an octogenarian lady who cheerfully tells him not to give up. Turning misery into something funny or transcendent - into spiritual truth - is the artist's job. One of the best haiku in all of Basho is when he's ill and staying at a miserable inn in the arse end of nowhere:

All you can do is laugh, because it really isn't funny at all.
Posted by adrian mckinty at 8:03 AM

Email ThisBlogThis!Share to TwitterShare to FacebookShare to Pinterest
Labels: basho, haruki murakami, the narrow road to the deep north, what I talk about when I talk about running
Newer Post Older Post Home