Case Closed - A Comet Wiped Out The Dinosaurs 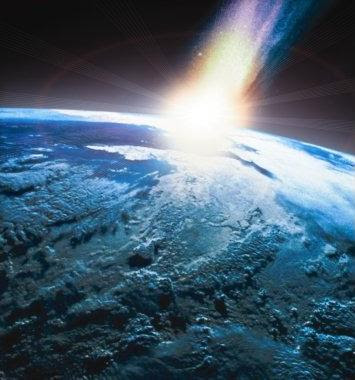 When I was a kid no one knew what had happened to the dinosaurs. There were, of course, lots of theories including: ice ages, vulcanism, asteroids and even as my old geography teacher used to claim - Noah's flood. In the 1980's geologist Walter Alvarez (working with his father Nobel Prize winning physicist Luis) discovered evidence (in the form of iridium scattered all over the globe at the K-T boundary) that a massive comet had struck the earth 65 million years ago wiping out half the species on the planet and almost all of the dinosaurs. Alvarez's theory was confirmed when an impact crater was found at Chicxulub in the Yucatan Peninsula. The crater was the correct age and had been made by a comet or asteroid 15 miles long which had struck the Earth with an impact a billion times more powerful than the A bombs dropped on Hiroshima and Nagasaki combined.
...
I first read about this theory way back in 1985 in Carl Sagan's book Comet (when I was still in high school and thus able to bring it to the attention of my geography teacher) but it has taken until now for it to be confirmed with the publication of a paper at the 41st Lunar and Planetary Science Conference in Houston. A distinguished panel of experts examined all the available evidence and competing theories and concluded that the Chicxulub hypothesis was the correct one.
...
I've been to Chicxulub, indeed, I set part of a novel there. There's not much to see except jungle: weathering has eliminated all trace of the impact crater, but it's still a strange and interesting place because it's from there that every one us owes our existence. If the rogue comet had arrived in our solar system at a slightly different angle or perhaps as little as 10 minutes earlier, the internet would have been invented by intelligent dinosaurs and we mammals would still be hiding up the trees.
Posted by adrian mckinty at 8:01 AM