Geeking Out Over Who 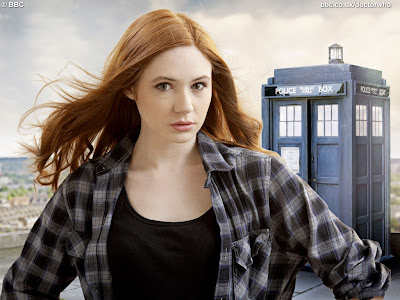 Ok so I was wrong about Dr Who. Or maybe I was right. In either case the upshot is that the show seems to be less campy and more enjoyable since Russell T Davis left. Someone at the BBC decided that the new series would be consciously pitched at older teens rather than young kids and in an attempt to get girls to go along for the ride there is a definite Twilight sensibility to the whole proceedings. The casting of the dreamy Matt Smith as the new Doctor is successful. Initially I resented the fact that the last last three Doctors have all been younger than their previous incarnation, but despite looking like a particularly intelligent undergraduate somehow Smith also gives the part real gravitas. The line where he said "I'm the doctor, I'm worse than everybody's aunt" convinced me completely when there was every opportunity for bathos.
...
Karen Gillan is a terrific new assistant for the doctor with no problems acting or speaking the English language which is a big step up from, say, Billie Piper. I'm a sucker for girls talking with a Scottish accent and the camera clearly adores Gillan's bright red hair and pale Pictish features. (Although it isn't quite up to High Noon levels, judging from the number of tight pouty close ups, the director clearly adores her too.)
...
I still have three lingering issues with Dr Who. The special effects are not good - they're cheesy, cheap and unbelievable which is inexcusable when you consider how much income the Who franchise brings in for the BBC. I'm also a bit fed up with the same old UK locations which make Who seem very parochial. Thirdly, those oh so sophisticated Brits still seem to think that slapstick is the highest form of humor. But still, I'm encouraged so far. Dr Who Season 31: A-
Posted by adrian mckinty at 10:27 AM