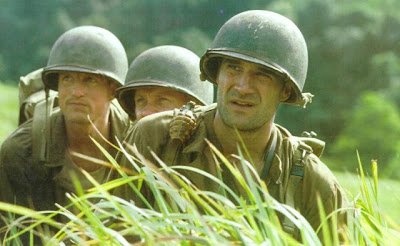 I've been reading The Thin Red Line by James Jones and one of the interesting differences between the book and the Terrence Malick movie is Captain Stein. In the film Malick changes Stein's identity to that of a Greek officer, Captain Staros, but in the book he's Jewish. Stein has one of the most memorable scenes in the novel when he refuses the direct order of his Colonel to suicidally sacrifice his company on a direct attack on a Japanese position during the battle of Guadalcanal. The scene is given all the more resonance in the book because Colonel Tall never lets Stein forget that he is a "Jew lawyer" in civilian life and he, Tall, is a WASP West Point graduate, class of '28. Why did Malick remove this interesting dimension from his film? I don't know the answer but it isn't the first time it has happened. Anyone who has read The Young Lions by Irwin Shaw knows just how rife the US Army was with Jew haters. JD Salinger told his daughter Margaret that the US Army was full of anti-Semitism and racism in World War 2, more so even that in regular life and Joseph Heller and Norman Mailer experienced a great deal of anti semitic taunts and attacks, some of which comes through in their books; yet in Spielberg's Band of Brothers we never hear a single racist or anti-Semitic remark from the saintly fellows of Easy Company. This is surprising, especially when they do plenty of grumbling about their incompetent Jewish C.O. They call him every name in the book but the K word never raises its ugly head.
...
Spielberg and Tom Hanks's The Pacific starts playing here this week and its already being praised as the most realistic TV show on the war ever; because of their track record I'm a little skeptical about that and I wonder if we'll ever see a World War 2 movie or TV series that really tells it like it was warts and all. As long as we're continually hero worshipping "The Greatest Generation" I suspect not.
Posted by adrian mckinty at 11:55 AM