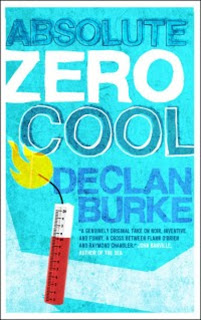 Most books are crap. Just as most songs are crap and most restaurants are crap.  Mediocre books are sometimes even more offensive than crap books because you can tell that the author is often intelligent and gifted but either through laziness or cynicism he has reined in his skills.
...
That's why I loved reading Declan Burke's Absolute Zero Cool. It's not crap. In fact it's a brilliant, experimental, out of left field crime novel, very much in the tradition of Flann O'Brien's The Third Policeman. Now you know how much I love The Third Policeman so this is high praise indeed from me. I was lucky enough to read AZC in manuscript and I thought it was funny and outrageous and very clever. You may think I'm biased, Dec and I are mates, we did a reading together in August and afterwards he stayed with me in Carrickfergus, but you don't have to take my word for it about AZC, John Banville and John Connolly also love Dec's book and a host of other writers have blurbed or reviewed it and whose quotes you can read at Dec's famous blog: Crime Always Pays.
...
Last week Dec was shortlisted in the crime category of the Irish Book Awards. His competition is stiff, but this, I feel, is his year. He certainly deserves it.