I Hear The Sirens 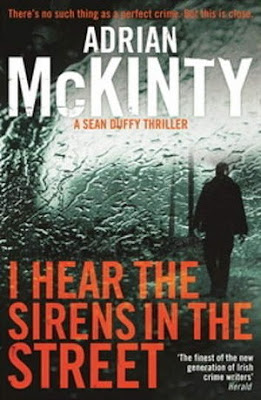 According to Ian Rankin's blurb for I Hear the Sirens in the Street, this crime novel ''blew'' his ''doors off''. To which I might add, ''and it rattled my windows too''. Given the context, Northern Ireland in the 1980s, the explosive metaphors are apt. Adrian McKinty, Belfast-born and now Melbourne resident, has a way with words. Try this selection of bons mots from the first 12 pages: entropic, simulacrum, ostinato, glissando, dissonance and kakistocracy. I had to look that last one up. It means ''government by the worst of men''. I am now deeply indebted to McKinty for introducing this useful noun into my repertoire. I intend to use it on a daily basis.

Now sample some of McKinty's cultural references from chapter one, bearing in mind the period: Chopin, Saint-Saens, Arvo Part, Paul Weller, the Bay City Rollers, Jackson Pollock, the TV series Dallas, Outlaw of Gor and Willy Loman (the salesman who ''died'' in Arthur Miller's play) - or, rather, think ''Willy Lomanesque'', since, with a deft suffix, McKinty turns a character into an adjective. Inventiveness is part of the McKinty repertoire, too.

While the eclectic vocabulary and the cultural allusions are diverting in themselves, they are there in the service of a plot, and it's not a bad one at that. Detective Inspector Sean Duffy of the Royal Ulster Constabulary and Detective Constable McCrabban have been called to a deserted factory where an overzealous, superannuated security guard opens fire on them despite their protestations:

Duffy and McCrabban are tracking a blood trail, as reported by the nightwatchman, that leads them to a dumpster containing a suitcase into which the torso of a well-preserved man in his 60s has been stuffed. As the security guard dry-heaves behind them, the two professionals conduct their assessment of the corpse with the cool detachment of those only too familiar with dismembered bodies.

But then, this is bomb-blasted Northern Ireland, several years into a civil war. The shops and cafes are boarded up, the parks and playgrounds are vandalised while ''bored ragamuffin children of the type you often saw in Pulitzer-Prize-winning books of photography'' are sitting ''glumly on the wall over the railway lines waiting to drop objects down onto the Belfast train''. Forget the Pulitzer-Prize-winning photographer, McKinty has the ability to capture an image in words that says it all.

Duffy's daily routine is a grim one. Coffee and a quick check under his BMW for any ''mercury tilt'' explosives before he heads off on the job of identifying the torso in the suitcase - a task repeatedly diverted by other emergencies, including, for example, a ''half-hearted sort of riot'' on a depressed housing estate. It's hard to get things done in the midst of an ongoing battle.

Throughout it all, Duffy keeps his cool - and, for the most part, his sense of humour. Despite the shenanigans of civil war, this is a very funny book that benefits from a knowledge of recent history. Take Duffy's visit to the ''real'' American DeLorean car factory in West Belfast. The fact John DeLorean went bankrupt in 1982 casts an ironic glow over an encounter that ends with Duffy seducing his secretary armed with a few Starsky and Hutch moves and a bowl of spaghetti. I Hear The Sirens In The Streets concludes with a teaser for the next in the series, And in the Morning I'll be Gone. Expect more doors to be blown off.