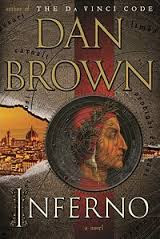 (The new Dan Brown novel Inferno will be released on May 15. I was lucky enough to get a galley from Doubleday and remarkably chapter 1 of Inferno is called The Lost Squirrel and coincides exactly with the chapter I found online and released here on this very blog 2 years ago...Amazing, eh?)

Robert Langdon woke from a dreamless sleep in his Cambridge apartment near Harvard University, America’s oldest and finest college of higher learning. Sleep, he knew, was a habit shared by all mammals and most invertebrates. No one understood why sleep was so necessary for these life forms but Robert Langdon knew that dolphins only slept with half their brain at any one time, otherwise they would drown. Dreams were another of the many domains of Robert Langdon's expertise. Freud, of course, was not the first to interpret dreams; famously Joseph of the Israelites, exiled in the land of Egypt, had become an expert dream reader for the pharaohs.

Robert Langdon got out of bed and walked across the carpet. Carpets had been covering the homes of human beings since weaving was discovered by the Sumerians in the second millennium BC. His carpet had not however come from Sumeria, but rather from the Ikea on I-95. It was 5.55 in the morning the same time philosopher Immanuel Kant woke each day for his constitutional walk around the city of Konigsberg. Kant was so regular that shopkeepers could set their watches by him. Now of course Konigsberg had been renamed Kaliningrad and was no longer in East Prussia but rather in the odd Russian exclave of Kaliningrad Oblast. Chuckling Robert Langdon wondered if the Knights of the Teutonic order would have been happy with that state of affairs.

“Oh tempora, oh mores,” he said in Latin, once the universal language spoken by all cultured peoples but now a mere tool for academics and the esoteric tongue of the Vatican.

In the kitchen the Harvard University wall calendar told him that it was Tuesday. Tuesday, he thought, remembering that it was named for the Norse god Tiu, the equivalent of the Roman god Mars. Tuesday was the second day of the week, coming between Monday and Wednesday. Tuesday and Thursday were the only days of the week that began with a T, although Thursday's T was a soft one, not a hard one.

Robert Langdon opened his Northland 3000 refrigerator, the most expensive fridge in the world. He took out a pint of milk. Milk he knew came from the lactation glands of cows. All female mammals lactated. He wondered if duck billed platypuses did so. Hmm, he thought, if only there was some device that could give him that information easily. Some kind of encyclopedia - perhaps stored electronically. If such a device existed you wouldn’t need everything explained all the time, because you could assume that people weren’t idiots and they could just look stuff up they didn't know.

He poured the milk into his bowl of cornflakes. Cornflakes of course had been developed by William Keith Kellogg as a health food, but now were consumed across the world by all cultures. He ate quickly. The Harvard University pool where he swam each morning opened at 6:30 and that only gave him fifteen minutes to get dressed in his trousers and polo neck. Trousers of course had been popularized by Beau Brummel following the sans culottes revolution in F-

The phone rang. “Is this Bob Langdon?” a guttural voice asked. A voice that seemed to be speaking from another dimension entirely, maybe even another universe. Modern physics had proven that many universes existed - the multiverse it was called - but telephone conversations between the universes had never been thought possible. Perhaps until today!

“I’m a Boise State man myself, listen Bob, we live just across the street and your car alarm has been going off for the last fifteen minutes, can you come out and turn it off, please.”

Robert Langdon knew that alarms had existed since Roman times when the sacred geese on the Capitol hill had alerted the sleeping citizens that an attack by the Celts was imminent.

"Can you go outside, please, pal. We want to get back to sleep.”

"Did you know that dolphins only sleep with half their br..." Robert Langdon began but the phone was dead. It reminded him that the first phone call had been made in this very city by Alexander Graham Bell who had unfortunately not taught at Harvard but rather at the inferior Boston University.

Professor Robert Langdon dressed and went outside. The alarm on his Porsche Boxster S was indeed sounding. Porsche was a German company founded in 1931 by Ferdinand Porsche, but that was not important right now, what was important was the alarm.

He turned it off with a push on his infrared key button. Robert Langdon was worried. What could possibly have set off this alarm in the first place? He examined the car’s roof. It was covered with squirrel poop. Squirrels were a type of rodent common in North America and Europe. The squirrel was in the tree, naked and afraid. Could it have jumped on the roof and started the alarm, shat itself and jumped off. No. That didn't seem likely at all. What struck Robert Langdon about the poop was the fact that if you cocked your head and looked at it in a funny way it seemed to be arranged in an aleph, first letter of the Hebrew alphabet and key to the ancient wisdom of the Zohar. A chill coursed through him.

“I have a terrible feeling,” he said out loud to no one in particular “that I am about to be thrust into another one of my strange adventures.”

The wind blew from the north, which in this hemisphere was where the polar regions lay. He turned up the collar on his coat and headed towards the Georgian buildings of Harvard University, America’s oldest and finest institution of higher learning.
Posted by adrian mckinty at 10:00 AM