The Not So Simple Art of Murder 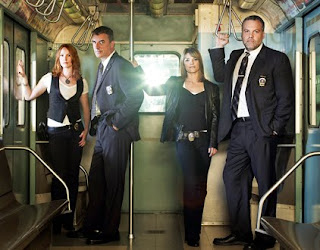 I'm reposting this from June of 2009 as what I said then is more relevant today. This year (2013) New York has experienced the lowest murder rate since reliable records began in 1963 and last week there wasn't a single murder in any of the five boroughs. The number of white murder victims in Manhattan this year appears to be fewer than half a dozen. White Manhattanites are thus living in the safest large Metropolitan area in the world (safer even than London) although you wouldnt know that from the TV. Anyway here's what I said back in 2009. I've corrected the data for the latest available year (2011):
...
The New York Times has published an interactive murder map of New York City which incorporates comprehensive NYPD data for the last eight years. The map is interactive because you can filter it by race/age/location etc. It makes for some interesting reading. I always thought it was amusing when I lived in Oxford that Inspector Morse stumbled across a murder every week when there hadn't been an actual murder in the city of dreaming spires in eight years. New York's plummeting murder rate has generated a similar dissonance. If you add up all the deaths on Law & Order, L&O SVU, CSI-NY etc. etc. there are easily 100+ murders in Manhattan every season and because most of the writers are white - and that's the demographic they skew to - most of the TV victims are also white. And this is where the dissonance comes in. If you look at the actual data around 92 percent of all murder victims in New York City are black or Latino. In Manhattan in 2011 27 people were murdered, four of whom were white. You heard me right. Four. (Although I am red/green colour blind so you might want to check that interactive chart for yourself.) Yes this is four people too many people and of course it still represents four tragedies but that's not my point. By several orders of magnitude there are going to be many more white Manhattanite crime victims on network TV, movies and in crime novels this year than actually died in real life. I reckon ten times as many white people will be killed on the Law & Order franchises alone than in the real world. Why is this? Well murder sells of course and as a crime novelist I don't want to put a stop to that but why can't the networks tell us the real story that emerges from the NYT interactive map? The real victims of crime in New York are black and Latino and they live in places like Harlem, Washington Heights, the South Bronx, Bed Sty. Places where the actors, execs and writers never go. Maybe the studios are worried that those stories wouldn't play in Iowa. Well the success of The Wire proves that realistic crime dramas can work, but it's not easy, you can't just give people formula, you've got to write intelligent believable characters; in short the writers would have to exercise that big muscle between their ears and the networks would have to stop playing it safe. Would Inspector Morse have been as successful a show if he had gone after bicycle thieves and cocaine dealers? Maybe. Maybe not. But I think a little dose of reality might have been fun once in a while. Similarly with TV, films and crime fiction. Perhaps they could at least make an occasional attempt to show the reality of murder in New York. It's a reality that mostly exists across 110th Street way beyond the comfort zone of most of the creative types, who if truth be told probably all live in Santa Monica anyway.
Posted by adrian mckinty at 9:39 AM