The Melancholy Brilliance of Louis CK and Stewart Lee 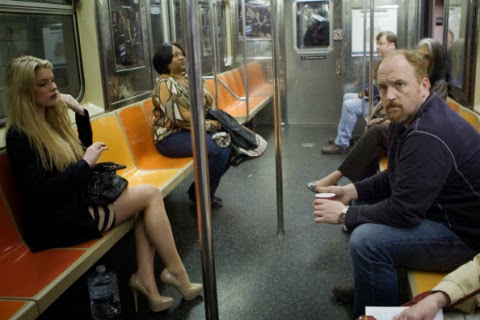 So says Heinrich Heine in his poem the Lorelei. Heine was a Romantic poet and later this kind of melancholy feeling so prevalent among the German Romantics became known as Weltschmertz. It is sadness that comes not for any specific reason but merely from being alive itself. Schopenhauer thought there were 2 ways out from underneath this sadness and those were 1) suicide 2) some kind of redemption through creative art. Samuel Beckett is the twentieth century artist who embraced Schopenhauer’s pessimissim to its fullest extent, but weaving in too existentialist notions of the absurd and a very dry despairing Irish sense of humour.

It seems to me that both the American comic Louis CK and the English comedian Stewart Lee have also embraced Samuel Beckett’s worldview in their latest TV programmes. Stewart Lee’s most recent series which just finished on the BBC comprises 6 half an hour episodes divied up into 3 elements: 20 minutes of bleak, minimalistic, intelligent standup about the travails of being a tubby middle aged man with two kids in a major metropolitan city i.e. London; an often surrealistic filmed piece that somehow captures the central motif of that week’s show and finally a comedic jabbing rebuttal to everything that Lee posits in the show - in the first two series this rebuttal was done by Armando Ianucci (he of The Thick of It and Veep) and in the latest series it was done by dark comic legend Chris Morris (he of The Day Today, Brass Eye, 4 Lions and also Veep).

Louis CK’s new series Louie which began on Monday comprises about 6 minutes of bleak, minimalistic, intelligent, standup about the travails of being a tubby middle aged man with two kids in a major metropolitan city i.e. New York, plus an extended 20 minute filmed piece on that night’s theme. I’ve written about CK’s show before here on the blog many times. Suffice to say that I think its one of the very best things on American TV at the moment. IT IS NOT A SITCOM or a comedy show. Do not watch it expecting laughs. It’s a despairing look at the life of an overweight 46 year old man struggling to make it in his chosen profession and coping with raising two daughters in our overstimulated modern world (this is a subject I can 100% identify with). There are moments of black humour in Louie but that’s not the point of the show. Louis CK, like Stewart Lee isn’t really in it for the laughs, or at least, he’s not just in it for the laughs. Like Beckett and Pinter CK wants to understand the sadness and see if there’s a way through it that doesn’t involve Schopenhauer’s solution #1.

Both series Louie and Stewart Lee’s Comedy Vehicle come highly recommended from me. But please don’t watch them looking for light relief. They’re not that kind of show. Louie S4 E2 was particularly grim I thought, but with just the perfect glint of light at the very end. I am a fan of both Lee and CK. Lee is very English and CK is very American and although they both plough the same furrow to like both of them is a little bit like being a fan of both cricket and baseball. (Which, in fact, I am.)