Who Is The Youngest Player To Have Played In The World Cup Finals? 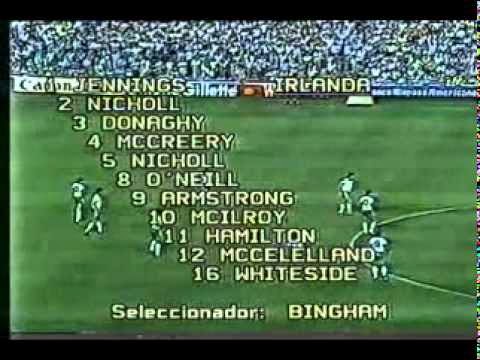 This is a post from four years ago, with an update at the end, which shows you that FIFA cannot
be trusted even with simple things like facts...
....
Northern Ireland don't hold too many World Cup records. We've qualified 3 times, lost more than we've won, never even made the semis and unfortunately we didn't qualify at all during the years when George Best was in his prime. One record we do hold is the youngest player ever to have played in the World Cup Finals. That young player was Norman Whiteside who at 17 years and 41 days played in Espana '82. I remember at the time the commentators stating that Whiteside had just broken Pele's record for the youngest player and that record still stands today. Or does it? Or was it even a record at all? I was glancing through Ben Schott's New York Times World Cup Miscellany, and under Youngest Player To Have Played in World Cup Finals he's got "Mario Mendez, Uruguay, 16 y 36d, 1954". Like any self respecting person with way too much time on his hands I immediately went to the FIFA website to confirm this information and lo it was confirmed. I then went to the Ask The Gaffer Website to ask the Gaffer about this astounding so called fact. Three people had been there ahead of me as the Gaffer explains:

Oddly three people have emailed me today with the same question. This is very intriguing. Like you, I've always known for a fact that Norman Whiteside is the youngest ever World Cup player, breaking Pele's record in the 1982 finals. Checking out this Mario Mendez impostor, however, throws up a mystery. On the official Fifa squad lists for the 1954 finals, there's no mention of Mendez (although curiously squad number 20 is missed out), but look at the match stats for the third place play-off match against Austria and there he is, bold as brass, wearing squad No.20. His player profile has him born on 11th May 1938, which sure enough would have made him 16 years, one month and 23 days old when Austria beat Uruguay 3-1 in Zurich (younger than Whiteside, who was 17 years and 41 days). However, the Fifa website is the only place I can find any reference to this. Every reference book I own and all other reputable websites have no mention of Mendez at all, and all list Whiteside as the record holder. I can only assume Fifa have committed a massive blunder or (less likely) that we've all been terribly misled. As for Edu of Brazil, he was in the Brazil squad in 1966, but didn't play a game until the 1974 finals, so Fifa are definitely wrong with that one!

The Gaffer, like Obi Wan Kenobi, is a wise old man of the desert and I trust his instincts but instincts are not facts. At Footbalistic their ref for Mario Mendez. has him playing for Uruguay in the 1962 finals when he would have been 24 years old. Meanwhile The Times newspaper recounts a story about Whiteside and Pele being on a plane together and Whiteside teasing Pele for only "being only the second youngest" now (when of course he should have teased him about letting Sylvester Stallone play nets in Escape to Victory.)

Despite what the Gaffer says there are many other websites out there that follow the FIFA party line. Who is right?
...
June 10 2014 update.
FIFA's website has now been changed to show that Norman Whiteside is the youngest player to play in the world cup finals. Mario Mendez, if he ever existed in the first place, has been wiped from history.
Posted by adrian mckinty at 10:06 AM