I Can Dig It - Heaney Poem Gets Statue 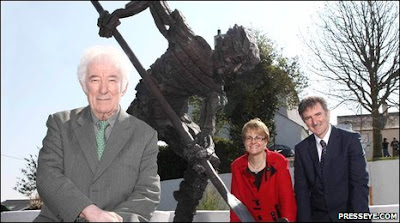 The town of Bellaghy in Northern Ireland has put up a statue to commemorate the Seamus Heaney poem 'Digging'. I do not know of many other statues in the world that commemorate poems, poets yes, but not usually actual poems themselves and certainly it must be a rare honour to see the work of a living writer so memoralised. 'Digging' of course is a canonical work of modern Irish literature; it was one of the future Noble Prize winner Seamus Heaney's first publications and it has been anthologized more than a hundred times. The picture I found on google shows Seamus Heaney and two anonymous council (?) officials with the massive bronze statue. Maybe this will inspire my local council in Carrickfergus to put up a statue to Louis MacNeice, our famous local poet, but considering the fact that they demolished his beautiful home without a thought for the cultural impact I suspect this is unlikely.

Between my finger and my thumb
The squat pen rests; as snug as a gun.

Under my window a clean rasping sound
When the spade sinks into gravelly ground:
My father, digging. I look down

Till his straining rump among the flowerbeds
Bends low, comes up twenty years away
Stooping in rhythm through potato drills
Where he was digging.

The coarse boot nestled on the lug, the shaft
Against the inside knee was levered firmly.
He rooted out tall tops, buried the bright edge deep
To scatter new potatoes that we picked
Loving their cool hardness in our hands.

By God, the old man could handle a spade,
Just like his old man.

My grandfather could cut more turf in a day
Than any other man on Toner's bog.
Once I carried him milk in a bottle
Corked sloppily with paper. He straightened up
To drink it, then fell to right away
Nicking and slicing neatly, heaving sods
Over his shoulder, digging down and down
For the good turf. Digging.

The cold smell of potato mold, the squelch and slap
Of soggy peat, the curt cuts of an edge
Through living roots awaken in my head.
But I've no spade to follow men like them.

Between my finger and my thumb
The squat pen rests.
I'll dig with it.