The Journey is its Own Reward 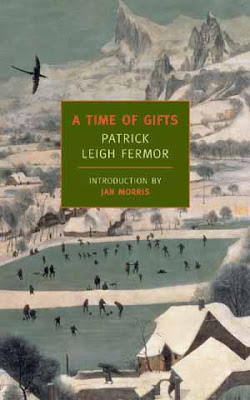 A genre I've always enjoyed is travel writing. I've never been tempted to do a travel book myself because I don't really like talking to strangers on trains or making copious notes about my trips - two things that are essential if you want to be the next Paul Theroux. My favourite travel writers include: Mark Twain, Norman Lewis, Rudyard Kipling, Eric Newby, Robert Byron, Paul Theroux, Peter Matthiessen, Evelyn Waugh, Jan Morris, Graham Greene, Freya Stark, Jonathan Raban, Robyn Davidson et. al. But my two all time favourite travel books are The Worst Journey in the World by Apsley Cherry Garrard and A Time of Gifts by Patrick Leigh Fermor. I'll blog about Cherry-Garrard another time but since he's still with us I thought I'd talk here about Fermor. In 1933 Paddy Fermor was 18 years old and washed up, he'd been expelled from school and couldn't get into university or the army and had no idea what to do with his life. So without speaking any modern European language (of course he was proficient in Latin and ancient Greek) he decided to walk from London to Constantinople. A Time of Gifts is the story of that trip, or at least the first third of it, being an account of his wanderings across newly Nazified Germany and into Austria and Hungary. Fermor began the book forty years after he took the journey and it gave him a lot of time to ruminate and contemplate the meaning of his wanderings, and, like a fine Bowmore single malt, 40 years maturation obviously leads to perfection. A Time of Gifts is a wonderful book filled with a young man's enthusiasm and an older man's wisdom. It's packed with beautiful descriptions, funny incidents and thoughtful commentary on the people and places he encounters. Much to his embarrassment young and older women seem to fallen in love with Fermor left and right and he had a knack for falling in love himself as well the ability to pick up German, Hungarian, Romanian and Greek.
...
After his Constantinople journey Fermor moved to Greece and he was there when WW2 broke out. The British recruited him to be a secret agent operating behind enemy lines in Nazi occupied Crete, where, somewhat incredibly, his small band of fighters managed to capture the German general in charge of the entire island - a tale which was told in the book and film Ill Met by Moonlight. After the war Leigh Fermor travelled in the Americas and spent time in Greek Orthodox monastic retreats. There's a great interview with Fermor in the May 2003 Paris Review which isn't available online and a nice New Yorker piece here which unfortunately requires registration to read the full thing.
Posted by adrian mckinty at 6:08 PM