Book of the Year 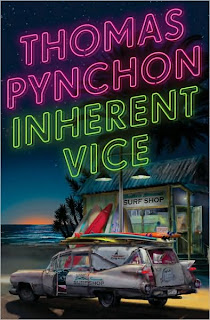 I read a lot of quality fiction this year from the likes of Garbhan Downey, Ken Bruen, Colum McCann, Hilary Mantel, AS Byatt, John McFetridge, Cormac McCarthy, Orhan Pamuk, Jonathan Lethem, Michael Chabon, Colin Bateman, Zadie Smith, Alan Glynn, Dec Burke, Gita Hariharan, Stu Neville et. al. but for me the novel I enjoyed most was Thomas Pynchon's Inherent Vice. At a party in July I had a bit of a friendly row about Inherent Vice with the crime reviewer of The Times; he felt that the book was disjointed and overly silly and not a proper crime novel but those were three of the reasons that I liked it. It is silly and its more of a riff on detective fiction than an attempt to fully engage the genre. Mainly though I liked the book because of its Big Lebowski vibe and the fact that its very funny. Chronologically it lies between The Crying of Lot 49 and Vineland and it sort of inhabits the same paranoid, druggy, conspiratorial, trippy, ascerbic universe. Here's a paragraph explaining why there are no blacks in Gordita Beach: "When a black family had actually tried to move into town [after the War] the citizens, with helpful advice from the Ku Klux Klan had burned their place to the ground and then as if some ancient curse had come into effect refused to allow another house ever to be built on the site. The lot stood empty until the town finally confiscated it and turned it into a park, where the youth of Gordita Beach by the laws of karmic adjustment were soon gathering at night to drink, dope, and f**k, depressing their parents though not property values particularly."
...
I've already posted about Inherent Vice twice, here and here so that's probably enough for now.
Posted by adrian mckinty at 8:17 AM