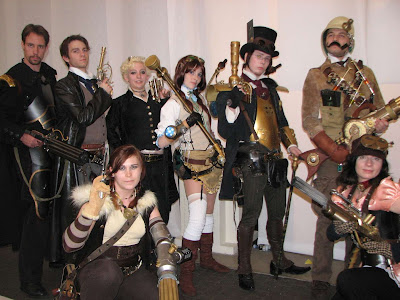 The first Steam Punk novel I read was The Difference Engine by William Gibson and Bruce Sterling. It was an early classic of the genre and envisaged a world in which Charles Babbage had got his Difference Engine beyond the theoretical stage: Victorian London sees the world's first steam powered mechanical computer and there's lots of fun and games with Lady Lovelace, Byron's daughter, Mary Shelley etc. Steam Punk is basically cyberpunk but set in an imagined technological past. Neal Stephenson writes a lot of these books and one of my favourites is Alan Moore's comic The League of Extraordinary Gentlemen Vol I and II (especially II). What I didn't know until today was the fact that you can buy Steam Punk clothing for men and women from The Steampunk Emporium , but of course it makes sense. If they sell Star Trek uniforms why not techno Victoriana? (I particularly liked the Emporium's gear for "Dewey Oldfield, the autoist" and "Barnaby Clifton the intrepid motorist.")
...
When I was at Oxford I remember there was a lecturer who rode around on an old fashioned bicycle and dressed in Edwardian clothing. He was an amiable nut, but as we saw with the costumes of Daniel Craig and Nicole Kidman in the film version of The Golden Compass, Steam Punk kit is much, much cooler for tootling around the city of dreaming spires, tootling around anywhere in fact. BTW, I have no idea who the people are in the above pic but it's nice to see the sheilas getting into the spirit of the thing too.
Posted by adrian mckinty at 8:04 AM