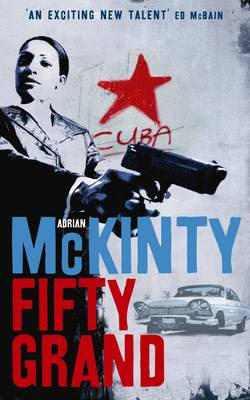 The Guardian newspaper has picked my novel Fifty Grand as one of its books of the year and as a recommended book for Christmas (thank you Justine Jordan). Fifty Grand also got a nod as one of the books of the year by John O'Connell in the The New Statesman and I got a hat tip from Chris Mullin in The Observer. So far so good in Britain! but this is a novel which has struggled a bit in the US. The reasons for this are many: the bad economy didn't help; it also wasnt good that my editor left Holt two months before publication and that my replacement editor left two weeks before the pub day. Editors are crucially important in getting blurbs for books and getting them into the hands of reviewers. With 50G review copies were only sporadically sent out, were not followed up on, and there was no budget for publicity. I also think the subject matter may have been too controversial for some American reviewers. Still the success of Stuart Neville's Ghosts of Belfast shows you what a dedicated publishing house can do (it also helps that the book is f**king brilliant) and in the UK the success of Fifty Grand is all down to the hard work of Rebecca Gray, Anna-Marie Fitzgerald, Pete Ayrton et alia at Serpents Tail; and in Oz, Kate Hyde at Allen and Unwin. Word of mouth of course also helps and if you were one of the people who reviewed Fifty Grand on Amazon.com or Amazon.co.uk or Good Reads or Audible.com rest assured that I not only read your review but showed it around the family and probably sent it to my agent to prove that "some people like me". Thank you very much, I really appreciate it.
...
Blurbs are important too and I'd like to thank Ken Bruen for being an early champion of Fifty Grand. Finally a word about the blogosphere. Because I didn't get reviews in the likes of The New York Times, The Washington Post etc. I was more dependent than ever this year on bloggers for their support, so a big thank you to Declan Burke, Gerard Brennan, Peter Rozovsky, Dana King, Brian Lindemuth, Seana Graham, Sandra Ruttan, Brian O'Rourke, Liam Hoyle, Dan Wagner, Jolie Jordan, John McFetridge and many others - without you I'd be up the bloody creek. Thank you guys and gals. If there are going to be Adrian McKinty crime novels in the future (something I'm thinking quite hard about right now) it will largely be down to your support. Go raibh maith agaibh.
Posted by adrian mckinty at 8:04 AM