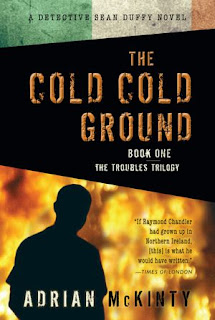 As of today The Cold Cold Ground is finally available in bookshops in the USA and Canada! (And if you can't get to a bookshop it's officially now available on Amazon.com and B&N.com too.) If you're not aware, TCCG is a mystery novel set in the Northern Ireland of 1981. TCCG takes place largely on the street where I was born and raised when I would have been about 13 years old, but it's not about me, it's about DS Sean Duffy a young detective in the RUC under incredible pressures from all sides of the sectarian conflict. Basically I wanted to do 2 things with the novel: 1. Tell a cracking good detective story; 2 Capture the zeitgeist and mood of what Belfast was like during the Hunger Strikes.

...
There have been 2 reviews of TCCG so far in the American press - Booklist and The Library Journal - and both gave The Cold Cold Ground starred reviews. (You can read those if you scroll down past the blogposts about Vertigo and Downton Abbey). TCCG came out in the British Isles in January and here are some representative views of the British and Irish press:
...
"If Raymond Chandler had grown up in Northern Ireland, The Cold Cold Ground is what he would have written." --Peter Millar, The Times

"Adrian McKinty is fast gaining a reputation as the finest of the new generation of Irish crime writers, and it's easy to see why on the evidence of this novel, the first in a projected trilogy of police procedurals." --Doug Johnstone, The Glasgow Herald

"Written in a terse style, the novel is a literary thriller that is as concerned with exploring the poisonously claustrophobic demi-monde of Northern Ireland during the Troubles, and the self-sabotaging contradictions of its place and time, as it is with providing the genre’s conventional thrills and spills. The result is a masterpiece of Troubles crime fiction: had David Peace, Eoin McNamee and Brian Moore sat down to brew up the great Troubles novel, they would have been very pleased indeed to have written The Cold Cold Ground." --Declan Burke, The Irish Times

"He manages to catch the brooding atmosphere of the 1980s and to tell a ripping yarn at the same time. There will be many readers waiting for the next adventure of the dashing, funny and intrepid Sergeant Duffy." --Maurice Hays, The Irish Independent

"What makes McKinty a cut above the rest is the quality of his prose. The names of David Peace and Ellroy are evoked too often in relation to young crime writers, but McKinty shares their method of using the past as a template for the present. The stories and textures may belong to a different period, but the power of technique and intent makes of them the here and now. There's food for thought in McKinty's writing, but he is careful not to lose the force of his narrative in introspection. The Cold Cold Ground is a crime novel, fast-paced, intricate and genre to the core." --Eoin McNamee, The Guardian.


"Tropes are tropes for good reason. The important crime-fiction ones are present and accounted for here -- a serial killer who purposely leaves clues, a cop who's on to him, procedural and forensic nitty-gritty. Yet McKinty can startle with bouts of lyrical scene-setting that could only come from the fingertips of someone who grew up in the environment. He tells us of "arcs of gasoline fire under the crescent moon... The scarlet whoosh of Molotovs intersecting with exacting surfaces. Helicopters everywhere: their spotlights finding one another like lovers in the Afterlife". He educates us about shopkeepers boarding-up their windows when a riot was due, or the ritual of paramilitaries leaving a silver 'Judas coin' by the corpse of a bumped-off informant. Your reviewer was born the year The Cold Cold Ground (a Tom Waits' lyric, by the way) is set in, and such passages work better at painting a picture than any episode of Reeling In The Years." - The Irish Sunday Independent

Jon Page at Bite the Book said: "No exaggeration, this is one of the best crime novels I have ever read. McKinty’s last book, FALLING GLASS, was superb but THE COLD, COLD GROUND blew me utterly away. It is easily his best book to date."

Audible.com picked the audio version of Cold Cold Ground as one of the best books of 2012.
...
So that's the pitch ladies and gentlemen. I know many of you reading this haven't got the book, well if you like what I do on this blog I can only suggest that you'll really like what I do in TCCG. Slainte.
Posted by adrian mckinty at 3:00 AM